2020 really was the year that kept giving.

There I was feeling all smug that my kids reached the end of term without anyone in either of their school bubbles having to isolate. Yes, there was the bit where we went from Tier 4 on Friday to Tier 3 on Saturday and then Tier 4 on Sunday, but I was already at peace with the idea that seeing any family on Christmas Day itself wouldn’t be sensible, so again it didn’t damped my festive enthusiasm too much.

By Christmas Eve I felt on top of the world. A long-overdue Zoom catch up with some friends was wonderful, and after that I decided to celebrate with a glass of wine. A rare occurrence these days. I went to bed and then had a weird night of tossing and turning and not being able to sleep properly. I woke up with a thumping headache and just assumed it was the effects of said glass of wine. I carried on as usual though with the youngest, who was incredibly excited about their first Christmas where they had a clue about what was going on.

By lunchtime the paracetamol had turned the headache into a dull thud and so I went of to collect the eldest two from their Dad’s before returning and starting the rest of Christmas celebrations here. By 3pm it was time to put dinner on and I was starting to feel rough. Really rough. Rough enough that I pretty much fell asleep on the sofa and B had to make Christmas dinner – which to be fair about he did really well, even if both of us did totally forget the stuffing until two days later!

A bit of food made me feel a little better and I perked up for a while, before slumping again as the evening wore on. That night in bed though I again couldn’t sleep, but this time though I was starting to feel all feverish. Alarm bells started ringing, but I could still smell and taste everything so I assumed it wasn’t Covid but something else. By the next morning though I felt no better at all and sensible me said it would be wise to get a test. Just in case. 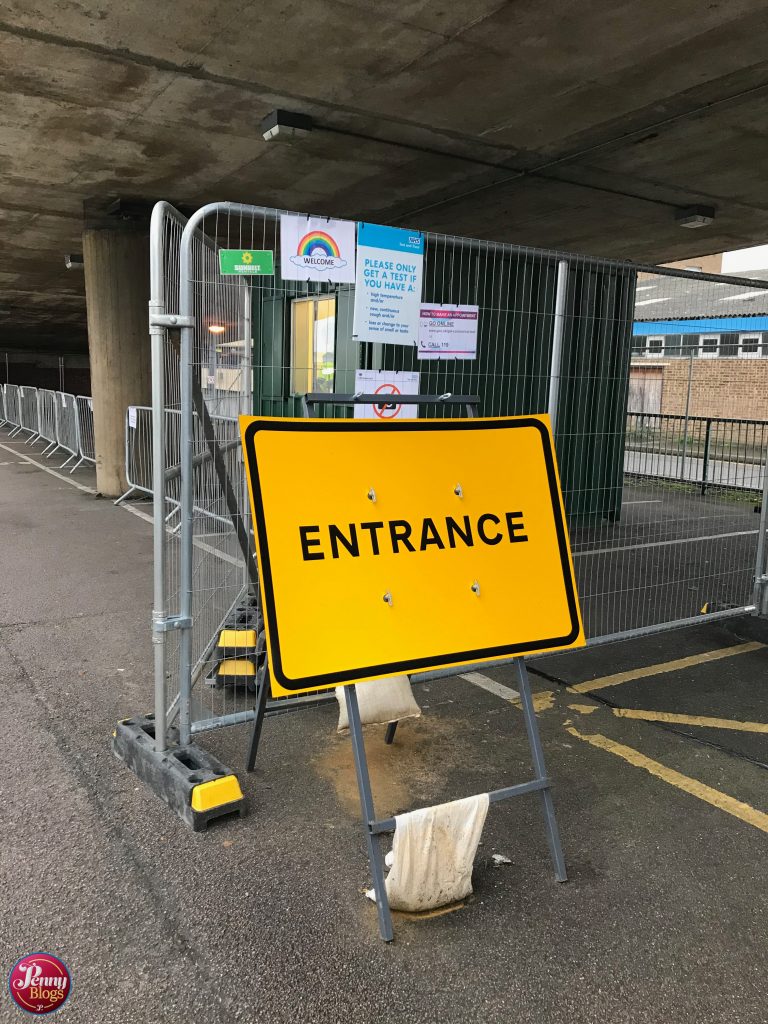 So, Boxing Day 2020 saw me heading to Luton and the glamorous location of a dodgy looking tent in an equally dodgy looking car park under a fly-over. As I approached, had it not been for the presence of a security guard in hi-vis, I might have assumed I was there to take part in a drug deal.

Credit where it’s due though – the whole booking a test process and actually being tested was incredibly straightforward. I was in and out within ten minutes and could have booked a test for as soon as 30 minutes after logging on to the NHS website.

Thirty six hours later my results came through and I was genuinely shocked to see a text message containing a positive result. Back in December it still felt quite unusual to test positive and many people didn’t know anyone who had. I spent ages trying to work out where I might have picked it up. Apart from one supermarket trip (when I couldn’t get a click and collect slot) I hadn’t been anywhere else at all. Literally just walking local streets with the kids. It’s my assumption that one of more of the kids picked it up at school, didn’t have symptoms themselves and then passed it on to me. My husband came down with symptoms five days after me, suggesting that I gave it to him, so that rules out it having come from him at work.

As time went on and the January return to school loomed it turned out that I wasn’t the only parent from my children’s classes who had been ill over Christmas. Nearly a third of us had and only in one case had their children shown any symptoms. This “new” strain seems to not only pass more easily, but also not present many symptoms in kids at all.

It goes without saying that having worked all this out I really couldn’t see how re-opening schools was sensible at all. Where my kids are at school in Hertfordshire the Covid levels were higher than many of the London boroughs where they announced that schools would remain shut. It made no sense at all and frankly sounded dangerous.

As a school governor, and in particular one responsible for some of the most vulnerable children in our school, I am fully of the belief that school is normally the best and safest place for our children. This definitely wasn’t the case in early January though. We were bought some extra time as my children’s school refused to take them back initially as there was still Covid in our household at that point (my husband was in his 10 day self-isolation period still) and even though the kids had finished their ten day period, there was no guarantee that they were not symptom free and had it in the same timescales. My kids school had an INSET day on the Monday, meaning that children were only due to return on the Tuesday, but of course all that changed when the latest lockdown announcement came through late on Monday night.

I could probably write a whole essay on the way the Government has handled Covid, and in particular the fact that so many announcements, especially ones involving education, come out late at night, or at least after the end of the normal school day. It’s infuriating, rude and creates even more work for people in what should be their down-time.

Trying to recover properly from Covid whilst homeschooling has been a challenge, to put it mildly, but as we head towards the end of January I think I’m nearly back to normal. I do seem to have the insomnia part of long-Covid that many people have reported, but other than feeling very unfit and a bit tired (which could be attributed to home-schooling!) I’ve come out of the whole thing pretty unscathed. At its worst I was aching all over my body in strange ways. I constantly felt cold and also developed a hacking cough. It wasn’t really how I expected Covid to be and was pretty debilitating at times. Not at all easy with two adults ill and three kids in the house. Three kids that had been looking forward to a normal Christmas…

Maybe for Christmas 2021 we can make a better go of things?